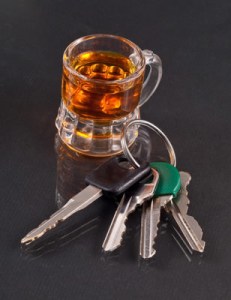 Every 30 minutes someone dies in an alcohol-related crash. And, did you know? Alcohol is a factor in 6% of all traffic crashes, and over 40% of all fatal crashes (National Safety Council). These are startling facts that one cannot simply ignore. Drunk driving is one of the most dangerous activities someone can engage in. It’s also 100% preventable.

An alcoholic beverage service professional has a legal and moral responsibility to serve alcohol responsibly, keep a close eye on imbibing patrons, and promote an alternative means of getting home if anyone appears too drunk to drive. One should make sure guests can make it home safely without injuring themselves or others.

Remember, drunk driving is always dangerous, and not just to the driver. Pedestrians, passengers and others on the road can all become victims. Recently in the early morning hours on April 28th, a woman was killed when she was hit by a suspected drunk driver on the Las Vegas Strip (Las Vegas Sun). This is another terrible reminder of the dangers of getting behind the wheel after having too much to drink.

Some people are able to ignore the facts. But remember, a victim of a drunk driver is someone’s sister, brother, mother, father, friend, coworker, etc. The Transport Accident Commission in Australia created an incredible PSA on the dangers of drunk driving which can be viewed here. This is a graphic video, but one of the most powerful PSAs we’ve ever seen at TAM® of Nevada. This video is certain to hit close to home for some, and sharing with others will help spread the message that drunk driving is never the answer.

There are a few things you can do to support and promote this message with your patrons.

Drunk driving is a serious problem that can affect so many. What tips would you give someone else to help prevent intoxicated individuals from getting behind the wheel of a car?

The ban on caffeinated alcoholic beverages, also called alcopop, was one of the biggest stories in the beverage service and sales industry in 2010. Popular beverages such as Four Loko were called dangerous, a binge in a can, and worse. Last November the Food and Drug Administration declared alcoholic energy drinks to be a public health concern. The FDA concluded that caffeine added to malt alcoholic beverages was an unsafe food additive (U.S. Food and Drug Administration).

What made the combination so dangerous? The FDA raised concerns that caffeine additives may have masked some of the effects consumers typically rely on to determine their level of intoxication. In fact, drinkers who consume alcohol mixed with energy drinks are 3 times more likely to binge drink than drinkers who do not report mixing alcohol with energy drinks (Center for Disease Control and Prevention). All of this was alarming enough to get these drinks pulled off of shelves, but also concerning was their popularity with teens and young adults.

Four Loko was, and continues to be, extremely popular with teens. A single can of Four Loko came in at 23.5 ounces, contained 12% alcohol, and also contained unsafe additives caffeine, taurine, and guarana. Four Loko came in much larger, and more potent, than a can of beer. In fact, concerns were raised that these drinks were marketed to appeal directly to teens (Marin Institute).

Several months later, Four Loko is back on shelves, without the caffeinated punch. The drinks have been reformulated and no longer contain additives like caffeine, but they still come in 23.5 ounce containers with 12% alcohol by volume (Omaha World-Herald). Teens may not realize they are consuming as much alcohol as they are until they are well on their way to unsafe intoxication. Four Loko still comes in fruity, teen-friendly flavors like fruit punch and watermelon. It also continues to be the drink of choice for many young people around the country (Bar Business Magazine).

What can you do as a beverage service professional to keep teens safe?

What policies have you instituted at your organization to deter teen drinking?

We here at TAM® of Nevada like to promote alcohol awareness and responsible drinking year round. However, we’re happy to help spread the message that April is Alcohol Awareness Month, sponsored by the Substance Abuse and Mental Health Services Administration. This is an opportunity to raise awareness of alcohol abuse and encourage people to make healthy, safe life choices.

Drinking too much alcohol can lead to health problems, including alcohol poisoning, hangovers, and an increased risk of heart disease. 3 in 10 adults drink at levels that put them at risk for alcoholism, liver disease, and other problems, and nearly 18 million Americans have alcoholism or related problems (NIAAA). These are “sobering” numbers that heighten the role that servers and sellers have in protecting their communities.

This April, during Alcohol Awareness Month, TAM® of Nevada encourages you to take this time to educate yourself about the dangers of alcohol abuse. Good judgment and knowledge of the Techniques of Alcohol Management (TAM) ® are crucial qualities in a service professional; and Alcohol Awareness Month is an opportunity for you to showcase your training.

Alcohol abuse is a dangerous problem. This month, reflect on your own habits and those of your patrons. Do you recognize the signs of alcohol abuse and binge drinking in yourself or others? You can learn more about the dangers of alcoholism in hospitality workers by reading our blog ‘Warning – Hospitality Workers May Be at Risk for Alcohol Abuse,” and learn more about spotting binge drinkers by reading out blog, “Beware of Binge Drinkers.”

If you recognize a drinking problem in yourself, a loved one, or a customer, it is time to take action by making changes in your life, or making suggestions to others on ways to get help. The National Institute on Alcohol Abuse and Alcoholism has published a helpful guide titled, “How to Cut Down on Your Drinking,” to help you form an action plan to tackle the problem. Some of their tips to cut down include:

Finally, remember one should never be afraid to ask for the help they need. One can ask for help from a friend, family member or doctor if necessary. How will you promote safe choices and alcohol awareness this month?

Each year, approximately 5,000 young people under the age of 21 die as a result of underage drinking; this includes about 1,900 deaths from motor vehicle crashes, 1,600 as a result of homicides, 300 from suicide, as well as hundreds from other injuries such as falls, burns, and drowning (National Institute on Alcohol Abuse and Alcoholism). These numbers are alarming, and service professionals should be diligent about ensuring that they are checking IDs and using their alcohol awareness training to avoid contributing to the problem.

Some adults are comfortable allowing their teenagers to drink at home, the thought process often being, “if my teenager is going to imbibe, I’d rather they do it at home under my supervision, and I don’t have to worry about them getting behind the wheel of a car or harming themselves”. Teenage drinking is dangerous, regardless of where it occurs, or who is supervising. Teens can develop dangerous drinking habits, and supervising adults should be diligent about promoting alcohol awareness and age appropriate life choices. Additionally, teens are more likely to binge drink than their adult counterparts. According to the National Society on Drug Use and Health, 72% of 18- to 20-year-old drinkers reported heavy drinking in the past month. (NSDUH).

Also alarming, a new study led by researchers at Indiana University, and summarized by CNN, shows teen problem drinking is not a phase, and could be a predictor of alcohol dependence in adulthood.

It only takes a minute to check an ID and prevent a minor from entering a bar and buying a drink, but what about off-site sales and service? Gas stations, grocery stores and liquor stores are all places that teens turn to in order to purchase liquor, and staffers at those establishments should take steps to ensure they are doing all they can to prevent illegal sales.

Service professionals must be aware of the facts and dangers of teenage drinking. These service professionals are required to obtain alcohol awareness training, and will learn valuable real-world information for dealing with these types of situations in their TAM® training. Off-site premises workers don’t necessarily know that if they sell beer and liquor to a legal adult, the adult won’t provide that liquor to teenagers, but using your best judgment and following store procedures will help to keep things safe and legal.

The national campaign We Don’t Serve Teens makes excellent and common-sense suggestions for helping to curb teenage drinking from off-site sales, “Create and maintain sales and service policies that every staffer should follow.” (We Don’t Serve Teens). Everyone involved in sales should be aware of store policies regarding acceptable forms of ID, when and how to refuse a sale, etc.

Retailers and off-site sales professionals should be diligent about checking IDs as well to make sure teenagers are not trying to purchase liquor with fake or borrowed identification. To learn more about recognizing a fake or borrowed ID, refer to our blog post, “Are Minors Using Fake IDs and Sneaking Past You?” Most establishments also have a guidebook, like the I.D. Checking Guide, for validating various forms of identification. Ask your manager if you have a guide like this in your establishment and refer to it if needed. The I.D. Checking Guide can be purchased from TAM® here.

Taking steps to stop teen drinking is everyone’s job. Parents, teens, workers, communities and others all have to work to make a difference. For more ways to help curb teens’ access to alcohol, refer to We Don’t Serve Teens’ suggestions.

What are some tricks that you’ve seen used by fake ID holders? How else do you think service workers can help curb teen drinking?